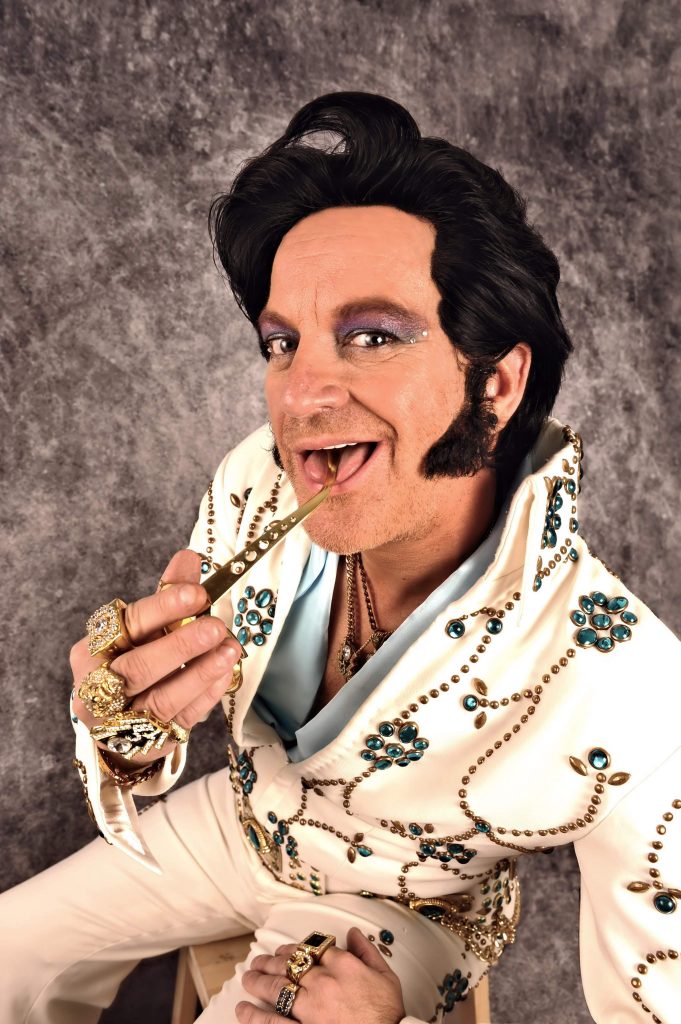 “His Stage Presence and timing are perfect, he knows who he is and what his comedy is about and you can almost taste his future success. Catch him now before he’s really famous!”

Paulo, Manager @ Pizza On The Park

“Haslam is an absolute riot”

“Always creates a buzz in the theatre”

“Rising Star on the cabaret circuit”

Elberace is a unique blend of Elvis flair and the politically charged flamboyance and individuality that James brings to the stage in his set of songs and stand up; Elberace turns the traditional Elvis on his head while staying true to the glamour, rhinestones and iconic quiff of the man himself.

This award winning and boundary-pushing Elvis act is breathing new life into a performance genre that was losing its appeal.

Since winning the 2019 Best LGBTQIA+ Elvis Tribute Act, Elberace has been celebrated and featured nationally in magazines, radio, and television.

Listed in the Top 5 Must Sees Acts at the Elvis Festival 2019 :
Feel fabulous with the first LGBTQ+ Elvis category
We are singing from the rooftops in celebration of the first LGBTQ+ Elvis category that is premiering at this year’s festival. Sweeping the stage and winning the 2019 title with his charming tribute is the iconic Elberace Gay Elvis. Renowned for his kitsch and saucy performances offering his unique take on the best of the King’s work, ranging from an interactive singalong with Elberace to Yoo Hoo From Hawaii’

Boyz Magazine’s Stephen Vowels reviewed Elberace at London’s Union Theatre
‘Rising Start on the cabaret circuit…It’s all there: the gyrating hips, the lip curl, the arm movements, the shaking of the torso. This is an act of pure robust energy performed in a unique style. Upbeat, joyful and immense fun. Elberace works because Haslam has studied the man, the legend, and what Elvis stood for as an exceptional showman and the ‘King of Vegas’. Stand out numbers include Walk A Mile In My Shoes and Suspicious Minds. A fabulous show – and I’m sure James’s star will rise to great heights on the current cabaret circuit.’

Remote Goat
‘His Stage Presence and timing are perfect, he knows who he is and what his comedy is about and you can almost taste his future success. Catch him now before he’s really famous!’